New 2015 Owner!
Hi all, I had started another thread asking about what to look out for, and now it's time to post a picture of what I bought! 2015 with the v8 and VIP package! 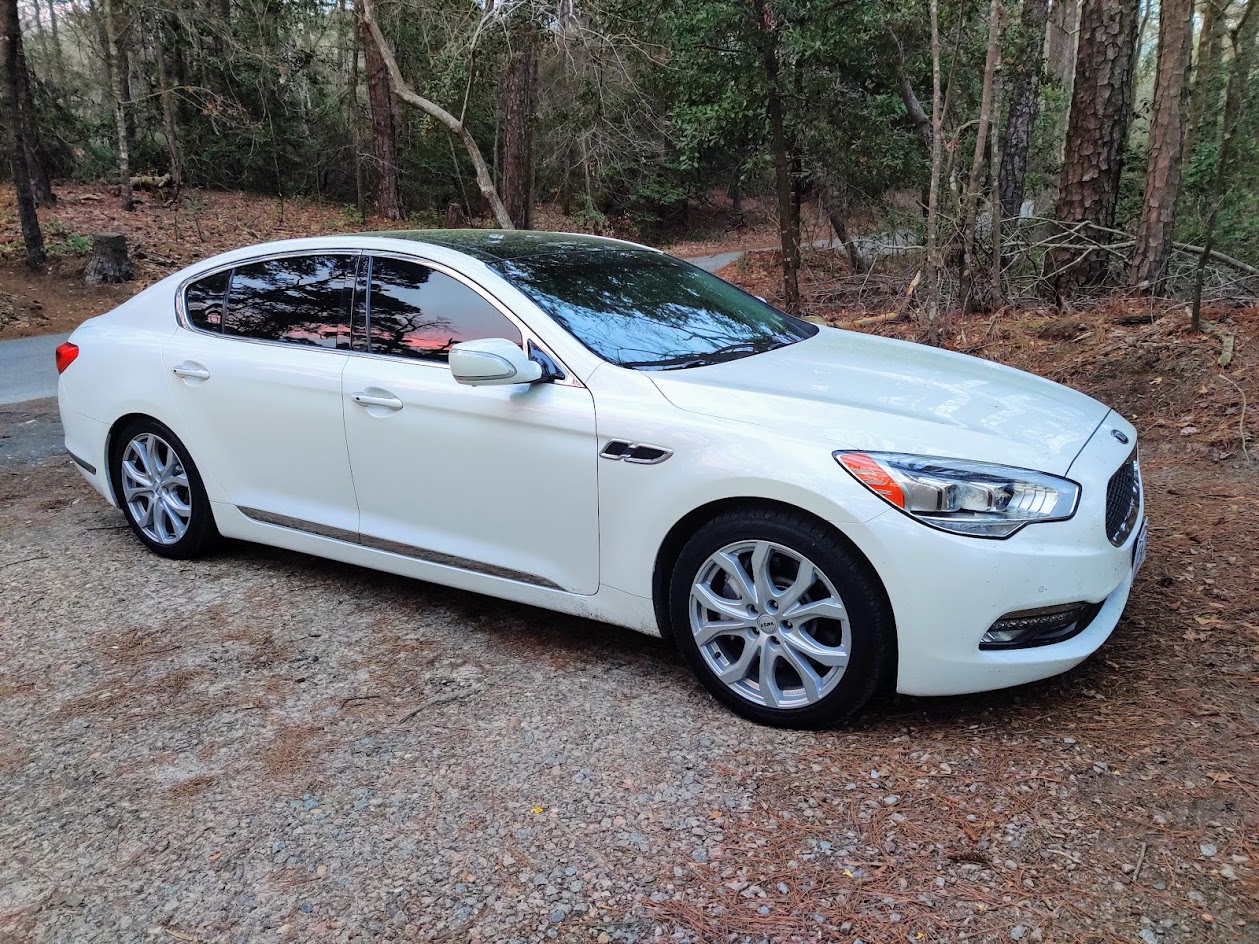 The first K900 I test drove was Snow White with black interior and CPO with 55k miles and priced at just under 22k. It did not have the VIP package which I had deemed a must-have since I wanted the adaptive cruise control. The steering felt quite loose, and the car shook under braking. I could tell it had not been well cared for and it was an easy pass.

The second one I drove was Formal Deep Blue with a white interior and about 36k miles priced at $20,995. It was smooth as silk and looked really great. I think I would have preferred this exterior and interior color combo to the one I purchased but it was not a VIP package. The only reason I went to test drive it was to see if it handled differently than the first one - it did and I loved it.

Then another Snow White with black interior popped up and this one was a VIP package and priced lower than the other two at $20,799. It had just under 40k miles and drove great. I told the salesman I wanted to put a deposit on the car and come back a few days later to show my wife. Instead he suggested I just take the car for a few days - he knew he would get the sale after that. It has some aftermarket Rial wheels that I will be replacing with some Hyundai Equus OEM wheels which are the same dimensions and fit as our harder to find K900 wheels. The previous owner also tinted the windows a little darker than I would have preferred but I'm not sure if I'll be changing that. If I do, I'll probably go with a little classier 50% tint all around (just my opinion of course). Anyway, it's been an awesome car so far!

Wow VIP V8 and under 40k miles, what a steal! I've had no luck finding solid deals on them in my area, and I'm looking pretty hard. Have one that I'm looking at currently but it's got some dashboard leather that's shrinking/receding. Not sure it can be repaired without replacing the leather wrap entirely.
ChronoAM is offline
Quote
post #5 of 17 Old 04-01-2020, 05:40 PM
K900 Pilot
Member

The wheels look great, I would keep them!
Your car looks great! I love that posh quiet ride. Did the 2015 VIP have the quilted Nappa Leather? My 2016 did, and the interior was really my favorite aspect of the car. I wish I had been a little more careful selecting mine when I bought it - you did the right thing by passing on the previous cars. I'm unaware of any negative feedback on the quality of the OEM Hyundai Equus chrome wheels. I'm not sure of the wheel sizes on the 2015 K900 vs the Equus, but the 2016 K900 VIP had different wheel widths on the front and rear (wider). Perhaps the Equus does as well, as the two cars are somewhat related. The likely reason those wheels are replaced is that the K900 chrome wheels were extremely prone to chipping - literally chunks coming out for no reason. It was also very obvious when it happens because the metal appears black in the chipped area and it stands out. The wheels that came with your new car are visually interesting and suit it very well. Was your insurance high on this car? I drove my car around 2200 miles a year and I'm a very safe driver with no accidents for decades, yet my insurance kept going up at every renewal time. I hope your car gives you many years of happiness.
tomspoon is offline
Quote
post #7 of 17 Old 04-03-2020, 10:04 AM
Kia-Driver
Member

Thanks everyone, I'll answer a few things:


Quote:
I agree they look pretty good, but there is a slight shimmy around 60-65 mph that I would like to eliminate. The tires are also pretty cheap, and probably the culprit, but I also want to get back to stock form since they are not staggered or correct offset.


Quote:
I don't have the quilted leather, although I really wish I did! The quilted brown interior would be my choice, it looks so good! The OEM wheels chipping is exactly what I thought may have happened, and another reason I've opted for the Equus wheels that aren't chrome as seen here: https://s.aolcdn.com/dims-global/dim...141A021001.jpg. They're the same staggered 19x8 in front and 19x9 in rear with the same offsets as K900 OEM. I still need to get some tires mounted but I'll probably wait until the pandemic has cooled off. Insurance is about $30/month more than a 2010 Prius driven the same miles.
vvet is offline
Quote
post #9 of 17 Old 04-03-2020, 10:54 PM
tomspoon
Junior Member

Quote:
I would first make sure that those wheels and tires are balanced properly, however that shimmy is a known problem that unfortunately affects many early USA K900's; Mine would shimmy at the same speeds, and my car had replacement Michelin Pilot Sport tires ($$$) that came with it when I purchased it. Yet it would occasionally still do it under certain circumstances, especially if the tires were over-inflated. Check to see which tires are on the vehicle, they may have already been replaced at this point at 40k miles. Michelin Pilot Sport tires were the cure that were recommended and I have to say they were marvelous and helped the handling of the car a great deal. I have not experienced the car with original Hankook tires, so couldn't comment on them - but many people have said that they are ill-suited to the car. I wouldn't expect changing wheels would make any difference, it has something to do with the components of the front suspension - someone else on the forum may have the technical information that applies. Still there are some manufacturers that make exact replica replacement wheels for you car, such as these: https://www.hubcaphaven.com/c/6092/k...eels_rims.html Some of these wheels are expensive but nowhere near as much as OEM replacements from your Kia dealer. Since they are not made by Kia, I would think they would be free of the defects plaguing the original K900 wheels.

I loved the Equus. Those wheels are very similar to your car's rims. My K900, which had 18k miles at purchase 12/17, was about 32.5k and I traded my great fully loaded 2014 Kia Soul ! with only 7500 miles on the clock for it. However my K900 seemed to have been driven hard and put away wet. And although it gave me problems, I miss it to this day, 14 months after I traded it in. I still reach for the audio system control knob! My car insurance at purchase time went up initially about $300; at renewal time it went up another $300(!) and I felt that I was being ripped off until I contacted other insurance companies, and received outrageous quotes that made me rethink keeping the car. Some things to watch out for: I had problems with the battery going dead and it tested bad once removed to be checked; it is in trunk and is difficult to remove. It's a special deep-cycle battery. At Kia it costs $430 but you can get one at Auto Zone for about $230; I'm in my 60's and I somehow managed to get it in and out but it weighs a TON so maybe get Auto Zone to help. My car had a weird problem that allowed moisture to condense in the trunk well under the spare, to the left of the battery; so much so it started to rust some of the tie-downs, etc. Kia tried to duplicate but after a week they could not find any leaks; they had a man in the trunk with a flashlight watching the seals while they sprayed water around the trunk. I found black mold under the panel beneath the trunk carpet so you might want to occasionally check that. Kia said they had never encountered it before, so it may have been something that only affected my car. And I bought my used K900 in the rain -huge error - and could not see that the front camera was chipped by a rock! When I traded it in, they told me they spent $1200 fixing that! Crazy! Unfortunately, that is something that happens when you buy a vehicle in the luxury class - nothing is inexpensive to repair. Hopefully you will avoid serious issues and will have great luck for many years to come.
K900 Pilot and vvet like this.
Last edited by tomspoon; 04-04-2020 at 04:20 AM.
tomspoon is offline
Quote
post #10 of 17 Old 04-10-2020, 02:31 PM
Lifer
Junior Member

Why The Chrome Wheels Chip
The reason you see black under the "chrome" on the K900 wheels is they are alloy wheels that have been powder coated to look like chrome. It's a good wheel but watch out for those Detroit-size chuck hole as as the rims bend. I have had three bend and needed treatment to straighten them. I am looking at the Equus wheel also.
Lifer is offline
Quote