Kia confirms that the K900 (Quoris) will debut in LA
Kia will be unveiling the recently renamed K900 this year at the Los Angeles Motor Show. The flagship rear-wheel drive sedan is called the Quoris glabally, and Kia has not released any technical details about the K900 as of yet.

The K900 will share its basic rear-wheel drive architecture with the Hyundai Genesis. It is also going to be available with six and eight cylinder engines, which are assumed to be the same as the the ones offered in the Genesis. Those are a 333 horsepower 3.8L V6 and a 429 horsepower 5.0L V8. The transmission will be an eight speed automatic.
mr.smith is offline
Quote
post #2 of 12 Old 10-29-2013, 11:25 AM
kQue
Senior Member

first official US Picture of K900

the more i look the more the whole thing is an amalgamation of every luxury car design cue for the past ten years.... vulgar to a degree.
jefferson is offline
Quote
post #5 of 12 Old 10-30-2013, 11:17 AM
kQue
Senior Member 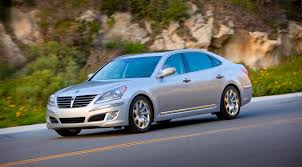 I think that it is a good looking car. Kia may not have as distinctive a look right now, but that will develop as Kia continues in the luxury segment. I like the vent detail the is to the right of the front door. It's a cool shape.
Bronie is offline
Quote
post #7 of 12 Old 11-05-2013, 01:35 PM Thread Starter
mr.smith
Member

I think this may be one of those cars that you can't reall understand until you see it in person. I think that the K900 will look better in real life than it does in picture. Does it sell well in the places that it is already on sale?
mr.smith is offline
Quote
post #8 of 12 Old 11-06-2013, 11:02 AM
jefferson
Member

Quote:
LOL yeah it's sad the Equus resembles a Mercedes by a lot. It's like they built this design off of the S-Class and made it more Hyundai looking: That is crazy how much the Eqqus looks like the Benz. Didn't realize that. I feel like the shape of the K900 is a bit similar to the Model S too.

Do you think that Hyundai/Kia looks at the cars they want to compete against and then takes cues from them?
Bronie is offline
Quote