Kia revealed its annual sales target of 55,000 units during a press conference held at Alpensia Resort in PyeongChang, Gangwon Province, with some 200 company officials and reporters in attendance. 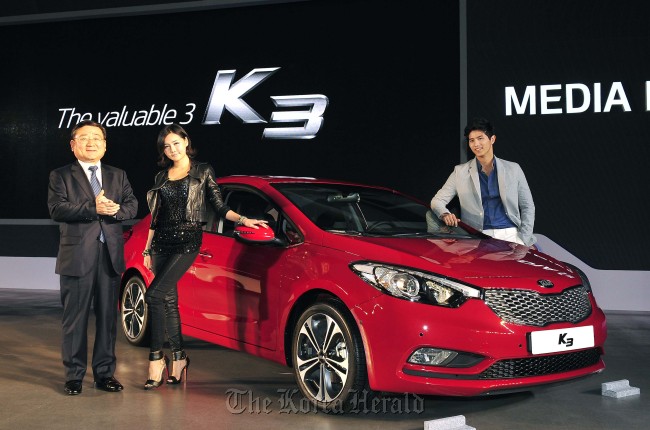 Kia Motors vice president Lee Hyoung-keun (left) and models pose with Kia Motors new compact sedan
K3 at a launching event held at Alpensia Resort in PyeongChang, Gangwon Province, on Monday. (Kia Motors)
Kia cars are creating a sensation in Korea and overseas markets with their unique design and product quality. And at the center is the K series, Kia Motors vice president Lee Hyoung-keun said in an opening speech.

The K3 will succeed the reputation and design identity of the K Series, delivering unprecedented value in the compact sedan market.

The car is also equipped with Kias next generation telematics service UVO that allows drivers to control their cars with a smartphone or other IT device.

Other smart features include a parking assistance system, a welcoming service that reacts to the approach of the driver, cruise control and a sliding headrest.

Kia Motors plans to start marketing the new K series in major markets including China and the U.S. by 2013.